Though the world is going through a tough time right now, UpdraftPlus has found a reason to celebrate! Your support has meant we’ve reached the amazing milestone of 3,000,000 active installs.

The UpdraftPlus office is in Wales, UK which has a population of 3 million – which means there’s a site actively using us for every person in this nation.

After hitting 2 million in December 2018, we’re humbled to reach this figure in an increasingly crowded and competitive marketplace. 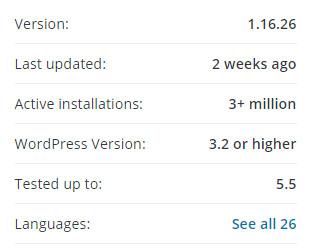 UpdraftPlus is now the 13th most popular plugin in the world.  Excluding official WordPress.org and Automattic plugins (which are pre-installed or promoted heavily in the plugin installer interface), we’re 8th most popular.

We also remain the #1 backup plugin (All-in-One WP Migration, which includes a backup facility but markets itself essentially for migrations, is on 2 million, with Duplicator on 1 million) – the next biggest plugin that directly presents itself as a backup plugin is BackWPup on 600,000).

We’d like to thank the team here, who even during these difficult times, have all continued working to improve the plugin and provide support in order to give you the peace of mind they need by providing the highest quality possible backup experience

But we couldn’t carry out the developments and improvements that have made UpdraftPlus so popular without all of our loyal users. So thank you again, and here’s to the next million!