Easy Updates Manager 8.0.5 has been released and includes a small numbers of tweaks and minor improvements (including tweaks to improve compatibility with other extensions, and to improve the clarity of messages going into Slack, and a security fix.

The security defect in previous versions (present since at least version 8.0.1 in October 30th 2018), allowed a logged-in user on the site, if he possessed sufficient skills, to tweak some (but not all) settings. For example, he could adjust the settings for whether automatic (background) theme updates should occur, or not.

We recommend that all users update.

Easy Updates Manager 6.4.8 has just been released. It took several tries, but we think we got all the CSS bugs worked out.

In WordPress 4.9, there are now plugins on the updates screen. We thought it would be nice to have those icons on our plugins/themes screen as well. See below for some screenshots.

Easy Updates Manager version 6.4.4 has been released and has a user requested feature.

New Feature: From Version in Logs

Logs From and To Version Added

Logs have been given a bit of an overhaul. In order to accommodate a “From” version, we had to store a transient for plugins and themes so there was something to compare to.

While testing this feature, numerous other bugs popped up, and we did our best to make this next version of Logs as bug-free as possible.

If you continue to have a problem with logs, please leave a support ticket or GitHub issue.

While we liked the new user modal, it was causing issues in various browsers. Because of this, it has been removed.

We’re still tracking data and want to emphasize that this is opt-in (voluntary) in order to adhere to the WordPress plugin guidelines. After a user complained of inadvertent tracking we did some digging and could not conclude that a user was opted in by accident.

When Matthew Sparrow and began working together on the future of Easy Updates Manager, we never imagined it would be as successful as it is.

When we launched our new react-powered Dashboard, we have several complaints that things take too long configure, especially in regards with automatic updates.

So we added tracking to the plugin to determine the use-cases. It was immediately apparent that auto-updates were problematic for people to turn on.

To combat this new-user syndrome, we have included a new modal for new users. 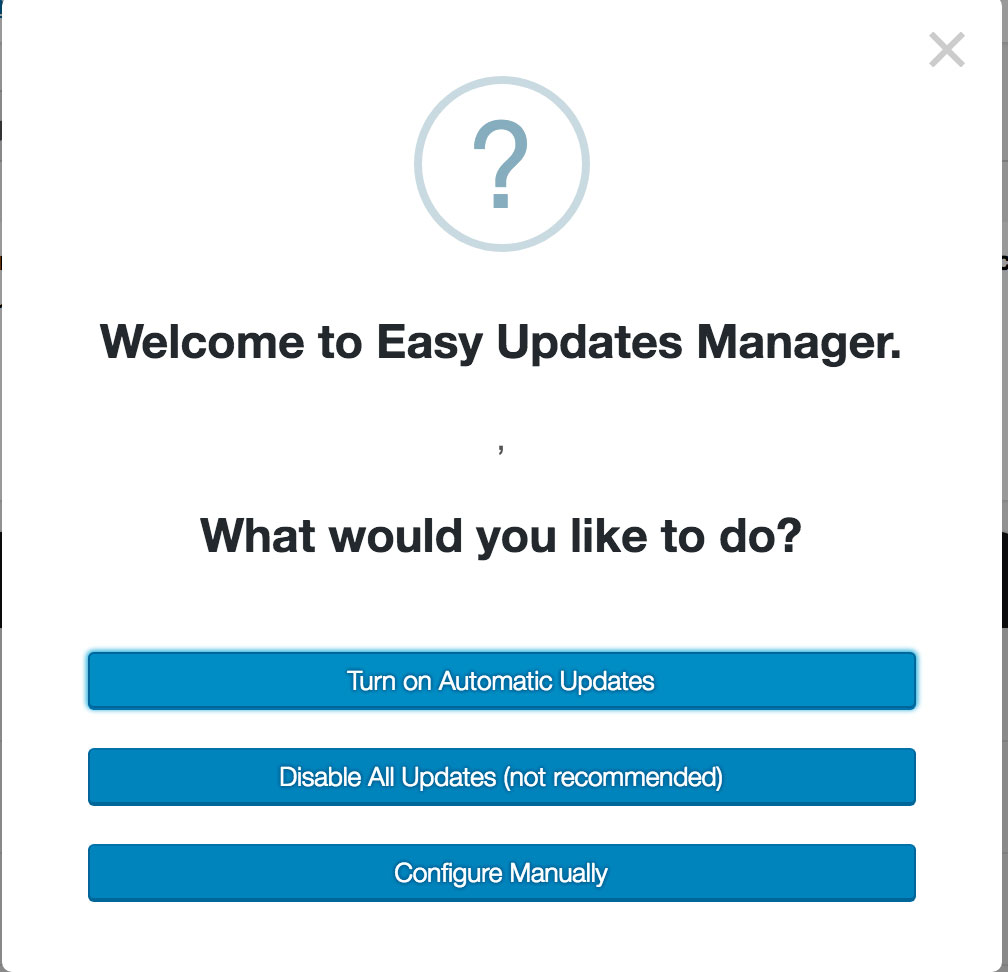 The current state of auto updates is unknown. Right now we are tracking 130 users who have autoupdates on WordPress 100%. Stay tuned for more.